I’m a bit backlogged on the blogging, but I’m catching up the best I can.

KJ and I traveled to Honduras together for a Habitat for Humanity trip. 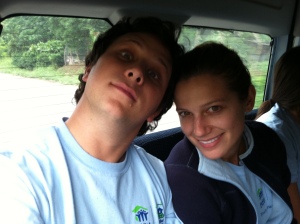 It was KJ’s idea to go, and I was on board with it until about a day or two out from leaving… when I looked up some fun facts about the country of Honduras.  First, it’s the murder capital of the world.  A little factoid that they fail to mention in the Habitat brochure.  More murders per capita than any other country in the world, including Iraq and Afghanistan.

Also, the airport we were flying into had a shooting spree go down not but 6 days prior to our arrival.  6 dead, 10 wounded.  Again, this was at the airport.  In the States, this would have been major news.  In Honduras, this was a Tuesday.

To be honest, we both had a feeling that it would be an amazing trip, but that something may go wrong.  We were on guard at the airport.  No problems there.  Smooth sailing on the 3 hour bus ride through the mountains to the hotel.  The first two days went off without a hitch…

… Then, at 4:45am on the 3rd morning, something happened.  Something horrible.  I got sick.  Like, the type of sick you don’t want to ever know, especially when you’re in a foreign country.  In a cold hotel room, with 1 fluorescent bulb and a bathroom door so thin, it might as well not be there at all.  I was in Puke City and Diarrhea Ville for the next 24 hours.

Sorry.  Graphic, I know.  But the serious question is this… how do you keep things romantic, exciting, and fresh when you’ve been privileged to the other side?  The dark side.

Again.  Sorry.  Here’s a photo of our bedside table while we were sick. 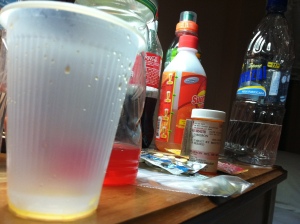 This was taken after the doctor gave me a shot, in my butt, of some medicine KJ was desperately trying to look up on the internet.  The hotel’s very spotty internet.

At the end of the day though, the shots worked, we regained our strength, and were able to help build a pretty crappy little house.  🙂

This entry was posted in Uncategorized. Bookmark the permalink.

1 Response to The magical mystery tour?